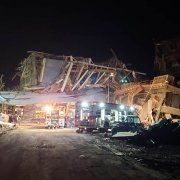 On 9 December at approximately 1030 hours the Central Ohio Strike Team (Region 4 USAR) was activated and deployed to assist the Region 6 Hamilton County Fire Chiefs Association Urban Search and Rescue team in Adams County. Initial reports indicated a power generating plant had collapsed during demolition, trapping 3 people. Brothers Jordan Irwin and John Kaltenbach deployed for Mifflin and rallied at Columbus Fire Station 34 with (39) other COST personnel. The COST left in a convoy of vehicles at around 1200 hours and arrived on scene two and a half hours later. Initial information was that it was a decommissioned nuclear power plant that had collapsed, but further information en-route changed that information to a coal fired power plant. Just prior to COST’s arrival Hamilton County USAR rescued one live victim from the pile who was flown to an area hospital. Once Brothers Kaltenbach and Irwin arrived in staging, they were given squad assignments prior to beginning search efforts. Brother Kaltenbach was designated squad officer for Squad 2 and Brother Irwin was assigned to Squad 5. Hamilton County’s personnel were operating on the rear of the structure and had a command post established. They were looking for the occupant of a dump semi and we were assigned to look for a worker who was reported to have been working off of a man lift. COST Squad 1 made initial entry into the pile through a hole they cut in sheet metal siding and were able to locate the site where the man lift was laying on its side under a considerable amount of rubble. The work area for searching was relatively small so only one squad could operate inside at any given time. COST’s  six squads rotated into the collapse pile every 30-45 minutes. Search cameras were utilized to search void spaces around the man lift, and partner saws, angle grinders and torches were used to gain access to as many other void spaces as possible in order to search using search cameras.  COST also worked along side search K9’s and one “hit” on the area the squads were searching in. Unfortunately after over 7 hours of searching , the two teams had exhausted their capability to search any further. The sheer amount of heavy steel and debris and the tight work area made any further progress impossible. COST picked up and returned to station 34, arriving back at approx. 0100 hours. Local 2818 commends Brothers Kaltenbach and Irwin for their work and commitment to service. Our Local extends our sympathy and condolences to the friends and families of the deceased workers.

19 Members from Local 2818 are members of the Central Ohio Strike Team. COST is a NIMS Type 2 urban search and rescue team based in Ohio Homeland Security Region 4 in Columbus. Approximately (200) personnel from (10) fire/EMS departments in Franklin and Fairfield Counties comprise the COST. It is one of (8) urban search and rescue teams based through the state, in addition to FEMA Ohio Task Force One.